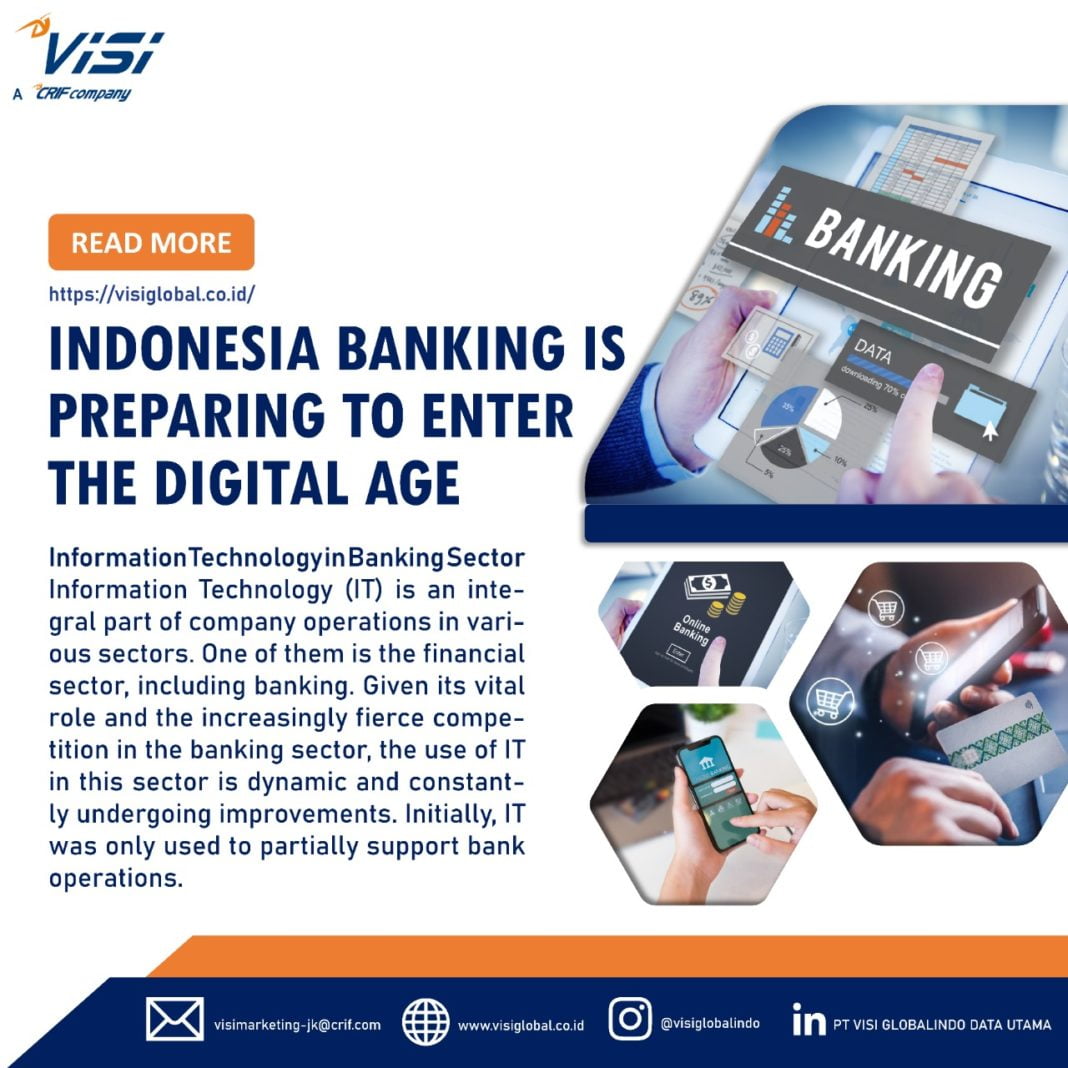 Information Technology (IT) is an integral part of company operations in various sectors. One of them is the financial sector, including banking. Given its vital role and the increasingly fierce competition in the banking sector, the use of IT in this sector is dynamic and constantly undergoing improvements. Initially, IT was only used to partially support bank operations. But now IT has become one of the main parts that support all banking operations.

IT services, known as electronic banking or e-banking, are initiated by implementing Automated Teller Machines (ATMs) which function as cash withdrawals. This is followed by the use of Electronic Data Captured (EDC) which functions to serve payment transactions for customer purchases. Since the use of mobile phones began to grow rapidly in Indonesia in the late 1990s or early 2000s, banks began to implement phone banking and short messaging service (SMS) banking services. Furthermore, in the last decade along with the development of data network technology or the internet, banks have begun to provide mobile banking or internet banking services. This service has high flexibility because it can be used anywhere and anytime with various service features, ranging from payment transactions, purchases, transfers, to cardless cash withdrawals at ATM machines.

Along with the development of IT today, the lifestyle and people’s need for banking services continues to grow. This encourages banks to improve their services so that customers can obtain various banking services independently (self-service) without having to go to the bank office or what we currently know as Digital Banking. Especially since the pandemic has spread all over the world, everything that is digital is preferred by the community, because the public or customers can access various services only from home, it reduces direct contact with other people and can avoid crowds.

The increase in transactions through mobile banking or internet banking channels led to a decrease in the number of transactions made through ATMs and bank offices. This has caused many bank branch offices to be closed because the bank prefers to optimize digital service features rather than increasing the number of bank offices. Based on data from the Financial Services Authority (OJK) as of March 2021, there are 29,889 bank offices throughout Indonesia. This number decreased when compared to March 2020 as many as 31,037 bank offices. In other words, in the past year, 1,148 bank offices were closed.

Meanwhile, based on OJK data, there are around 92 million Indonesians who have not been served by banks. In addition, only 12% of the 59 million micro, small and medium enterprises (MSMEs) in Indonesia can access banking services. With digitalization, it is hoped that banks can reach the community or MSME actors who have not been served. Because through digitalization, banks can collaborate with other financial service sectors, such as peer to peer (P2P) lending financial technology (fintech), cooperatives, pawnshops, finance companies, microfinance institutions, marketplaces, or e-commerce that have networks, conveniences, services, and wider access.

Based on OJK data, as of June 2021, there are 6 digital banks in Indonesia, namely:

Meanwhile, currently there are 7 banks that are in the process of becoming a digital bank, namely:

As a regulator and supervisor in the financial sector, OJK is currently preparing complete rules regarding digital banking which are planned to be issued before the end of the first half of 2021. In the new regulation, OJK will regulate all aspects of digital banks in detail, from establishment permits, capital, technology, up to services.

In terms of capital, OJK will require new digital banks to have a minimum paid-up capital of IDR 10 trillion in cash. OJK, will also classify digital banks into two types. First, a new bank that implements a fully digital system. At this type of bank, customers can enjoy service facilities independently, from opening accounts, saving funds, getting loans, to enjoying other financial services. Second, the old (existing) bank that is transforming into a digital bank.

THE RISE OF ELECTRIC CARS, HOW WILL IT IMPACT ON THE INDONESIAN AUTOMOTIVE INDUSTRY?

KNOW PORANG AND ITS POTENTIAL! ONE OF THE OF STAPLE FOOD CANDIDATES AND A NATIONAL EXPORT INCOME SOURCE