Government Administration is the management process of government activities in implementing their political power, which includes the activities of various departments, both legislatively and judicially. 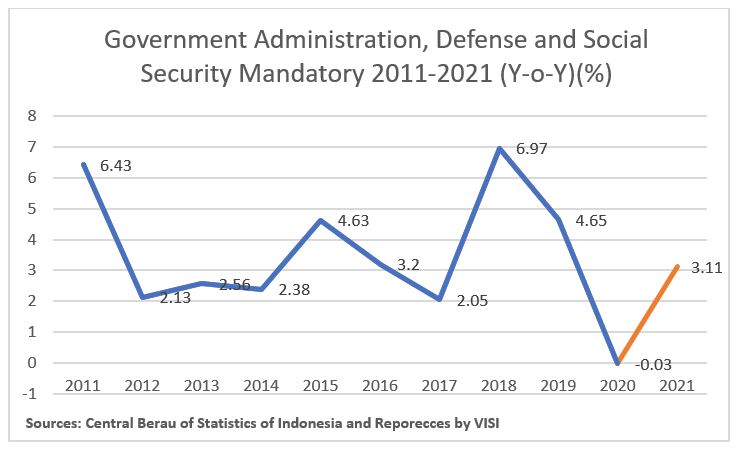 Based on data from Badan Pusat Statistika (BPS), the government administration, defence and social security sub-sectors declined significantly in 2020 by minus 4.68 points or contracted by 0.03% from the previous year.

The decline was caused by the COVID-19 pandemic, which lessened the performance of government employees as impacts of health regulations that limited their activities, and the lessening realization of government expenditure, particularly for the group of goods and capital expenditures. 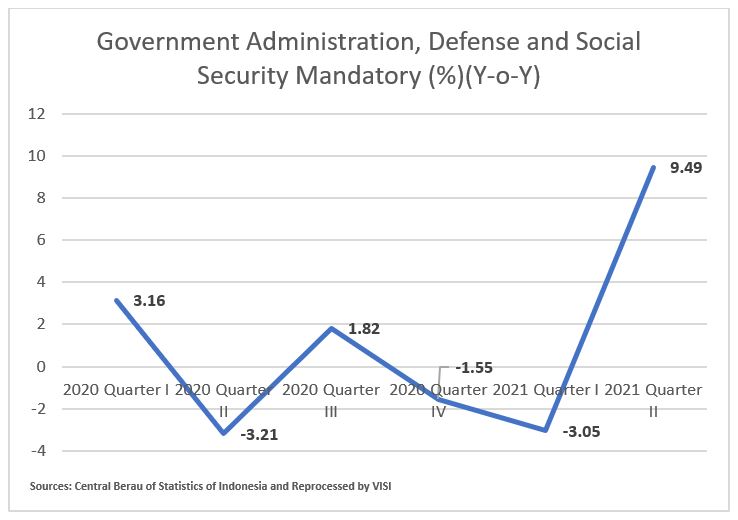 Entering Q2/2021, the government administration sub-sector recovered and increased to 9.49% (Y-o-Y), in line with the progress of COVID-19 vaccination and the recovering work activities of Indonesian people.

In detail, realization of the government expenditure reached IDR 1,087.9 trillion, or increasing by 10.9% yoy. It consisted of the Government Ministry/Institution (K/L) expenditure of IDR 628.6 trillion and non-K/L expenditure of IDR 459.3 trillion. Meanwhile, the realization of transfers to regions and village funds (TKDD) was contracted by 15.2% (YoY) to IDR 472.9 trillion, consisting of IDR 429.2 trillion for transfers to the regions and IDR 34.7 trillion for the village funds. As also stated by the Minister of Finance (Menkeu) of Indonesia Mrs. Sri Mulyani Indrawati, the low realization of regional spending is because part of the regional income came from the Transfers to Regions and the Village Funds (TKDD). (source: www.kontan.co.id)

INDONESIAN ECONOMY: EVEN THOUGH IT IS PREDICTED TO RISE, WE MUST REMAIN VIGILANT

THOUGH SLOWLY, INDONESIA ECONOMY IS IMPROVING AND GETTING BETTER

Furniture Sector Development, The Drops in Exports and Growth